The Top Gear Team are Reunited on The Grand Tour

The Grand Tour sees the return of Jeremy Clarkson and it will air on November 18th, courtesy of Amazon Prime. The new car show will rival Top Gear as they go head-to-head for viewing figures. 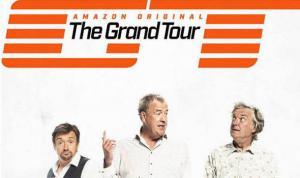 On top of the genuine interest on the show itself and the exciting adventures it will bring to the screen, much of the significance will be down to its rivalry with Clarkson’s former show, Top Gear.

So what is The Grand Tour? Since Top Gear saw the departure of it’s three popular hosts, there have been constant rumours about the trio and they have now finally reunited to bring this show to the public. Jeremy Clarkson, James May and Richard Hammond will all get together to present The Grand Tour. A show that is about adventures, excitement and friendship. You can be sure to see an array of cars, racing, scenic destinations and arguing just like we did in their last programme. It will be interesting to see how this show fairs against the BBC, as the new Amazon Prime outlet will be the platform for the series. Clarkson already described his lack of anxiety for success, as he downplayed the importance of views, saying- ‘I’ll be dead soon’ although his nonchalant commentary might be a little exaggerated. Although it will be a while until we find out how much of a success The Grand Tour is, we do know that it’s already captivated the public. Its trailer alone has chalked up over 12 million views online since its release last month.

The three presenters left Top Gear abruptly after rumours of a fight between BBC producer and, who else, but Jeremy Clarkson. It’s alleged that a verbal argument soon escalated into a physical brawl of some kind, although it has never been confirmed or denied. It’s believed that the three presenters will take satisfaction out of the decreasing Top Gear figures that left Chris Evans with no choice but to leave the show, after only months of working for the car programme.


What is it all about?

It is expected to provide three 12-episode series with each one lasting around 60 minutes. What can we expect from The Grand Tour? We can expect fireworks, banter and excitement, as all of that comes attached when these personalities get together. They will travel the world and be met with different tasks or situations that they must tackle. There will no doubt be a similarity to Top Gear, but they seem to have widened the criteria for this, which will in-turn enable them to get involved in more activities. The trailer above gives us a snippet of their adventure that entails three friends, four continents and countless accidents. The advertisement gives us a sense of what it’s all about, as their ever-lasting humour hasn’t faded from their BBC days.


How can we watch It?

It was so easy to flick through to BBC and watch Top Gear, and obviously it still is, although recent figures have shown that it’s happening less often. But, how can we watch The Grand Tour and all of the excitement that comes with it? Despite Netflix entering a bidding war with Amazon, they were defeated and didn’t manage to host this series. So the episodes will be shown exclusively on Amazon. For those that aren’t familiar, you can join Amazon Prime, which doesn’t just let you see this show, but gives you videos, audiobooks, programmes, same day delivery and more. There are a number of reasons to join Prime and this is definitely one of them. You can keep a look out for new Amazon Prime deals with our Amazon discount codes. Alternatively if you’re not convinced by this show and feel like staying faithful to your trusty Top Gear episodes then you can stay tuned to the BBC. But of course, if you prefer Clarkson, May and Hammond’s version, then you will have to purchase their old episodes via HMV promotional codes or The Hut promo codes.