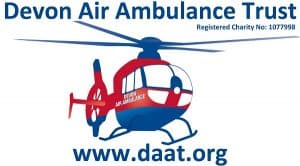 Devon Air Ambulance provide a live saving service throughout the county of Devon, relieving sickness and injury through the provision of their emergency air ambulance service.

Last year, the cost of keeping the air ambulances flying was £7.5 million, and this sum was met entirely because of the support given from fundraisers, corporate supporters, customers and donors to charity shops, along with lottery members and individuals remembering the charity in their will. It is entirely through these supporters that these costs are met - the charity is 100% independent of Government and National Lottery funding.

Devon Air Ambulance is supported by over 600 volunteers, donating their time and skills to supporting events, the organisation's 19 charity shops, box collection, working at head office and giving talks to community groups, local businesses and schools.

In Devon, there are now 128 Community Landing Sites. As a result, it has been made possible to reach patients during dark hours by providing floodlit locations allowing the helicopters to land safely. In early 2019, to ensure the service could attend even more patients in need of urgent medical care, the service was extended to 2am. Additionally, the charity was able to take on 7 new Critical Care Paramedics along with 2 new pilots to help serve the communities across the county. This was all down to the generosity of the charity's supporters.

Ultimately, Devon Air Ambulance aims to become a 24 hour service, something that remains a possibility with the continued support of Devon's communities and businesses.

In many medical emergencies, every second counts, so getting the specialist skills of the Critical Care Paramedics to the patient as quickly as possible is a must.

Devon Air Ambulance also two Critical Care Cars - emergency vehicles that have been adapted to carry the life-saving equipment that's found on board the air ambulance. offering the same specialist service to patients. This means that in situations preventing the aircraft from flying, such as poor weather conditions, Devon Air Ambulance can still provide the same life-saving service to patients who need it most.


How is Devon Air Ambulance Funded?

The two Critical Care Cars were provided in August 2019 after the charity was awarded capital funds. Additionally, the capital funds enabled provision of 22 Public Access Defibrillators close to Devon Air Ambulance locations across the county.

As a county that has a rich tourist industry, Devon welcomes an increase in population during the summer months. As a result, Devon Air Ambulance continues to expand their services, meeting the needs of the county's residents and visitors.

To find out more about Devon Air Ambulance, or to make a donation to support their work, visit their website.