How to Rise Up and Prevent Bullying

Bullying Prevention Month is coming to a close but that doesn’t mean we can’t continue to combat mistreatment. There’s a lot we can learn and take on board, not just each month, but every single day. 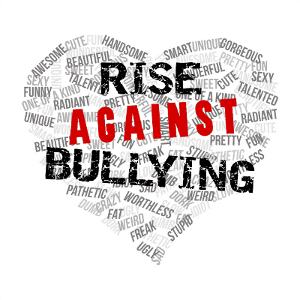 It’s always great to see hashtags such as #BullyingPreventionMonth trending across social media and it helps us all become aware. The observation began in 2010 and since then, has helped everybody join together to promote ways of preventing bullies. Be sure to share this article and message us on Twitter- @MFVoucherCodes.

When you hear the word ‘bully’ or ‘bullying’ your first connotation is bad behaviour in a school playground. But these antics extend further than playgrounds, and are still utilised in a grown up work place. The interpretation of bullying can differ from person to person, but it can be name-calling, taunting, belittling, singling out, embarrassing people, threatening behaviour, abuse (physical and mental) or manipulating. These are some of the ways to grasp the term and figure out if you have been bullied or seen it take place.

Regardless of whether you’re being victimised or your child is being picked on, the same principles apply and that’s why we list some of the actions that can be taken to help prevent such on goings.

The moment you let bullying go unnoticed, you are showing that you condone it and are effectively encouraging the perpetrators to continue. They’ll believe they have others’ backing and this will reflect in their continuance of this negative treatment. Show that you don’t stand for it, don’t laugh at them and definitely don’t encourage it. This will deter their ideas and once they don’t feel like the majority, this could potentially dispel the bullies. Stand together and look out for one another, this doesn’t mean that physical action should have to be taken, it merely means rejecting to conform to their behaviour and maybe even making that clear. Alternatively you can tell somebody that could help you and the victim, this could be in a workplace or school.

A bully’s worst nightmare is confidence, and it can sometimes be the source of bullying in itself. This works on a multitude of levels, with their own low self esteem driving them on and somebody else’s high confidence highlighting their inner incompetence. Try to stay confident and don’t let people knock you down, this becomes an important factor particularly in a work environment, as you look to rise to the top there will be many trying to knock you down. There’s a term that goes ‘Crabs in a bucket’, it refers to the fact that crabs in a bucket won’t allow another to climb. As one crab makes their way to escape, the others grab it and bring it back down, in other words, if they can’t get to the top, nobody will. Stay as confident as possible and hopefully you can watch their negative comments or manipulation rapidly evaporate.

Don’t bottle it all in, dealing with bullies can be difficult. This goes for adults and children. Whether you talk to a friend or family, it is important to let somebody know what you have to cope with. Preferably you’d tell somebody of authority, who can help make a difference. For instance, a head teacher of a school or a manager. Children can call Childline for some advice and it’s all completely confidential.

Don’t Stoop to Their Level

It’s no good fighting fire with fire, and it wouldn’t be the right thing to do in this situation. Rise above their pettiness and that’s more likely to halt their bullying tactics. If you react to it, they will be getting exactly what they want.

It’s all well and good listing ways to combat bullying but it’s not always that easy when you are in the situation. That’s why one of the most important things to do, is tell somebody. Suicide is one of the biggest killers in young people and victims of bullying are nine times more likely to commit suicide. With these worrying stats, it shows exactly how important it is to stick together, not just for Bullying Prevention Month but going forward. How can you help? If you aren’t being bullied, and don’t know anybody that is but want to play your part, there are a number of charities you can volunteer for, donate money or even just spread awareness. Here at Discount Promo Codes we support a number of charities and allow consumers to vote each month, so another avenue is to use Asda promo codes, Sainsburys discount codes or Debenhams voucher codes, but then vote in our monthly poll when you have the chance to vote for a charity that stands up against bullying.