‘I carried a watermelon’. That famous line from Dirty Dancing holds so much more significance on today of all hallowed days, National Watermelon Day. Indeed, we all want to be carrying that watermelon because once you find out exactly how many benefits and uses this not-so-humble fruit has, you’ll never want to let go of it ever again. It’s seems fitting that our National Watermelon Day should be in August because here in the UK we don’t always enjoy the sort of weather that seems fitting for watermelon consumption apart from in these warm summer months. So grab your watermelons and make them count while you can…


A Winner in its Own Right

Let’s start with a celebration of this fruit in its purest form. Although it’s become trendy to use it in various recipes or even eat its seeds (more on that later), many will argue the best way to eat a watermelon is with as little fiddling about as possible. And if you are going to eat it freshly sliced, did you know that it’s best to consume it at just below room temperature? Not only will this give you the very best flavour, but watermelon that is eaten at room temperature on just below contains between 10-20% more of the antioxidant lycopene as well as double the amount of the Vitamin A-rich antioxidant beta carotene. In fact, watermelon has so many health benefits we think these deserve their very own section in this post (see below). 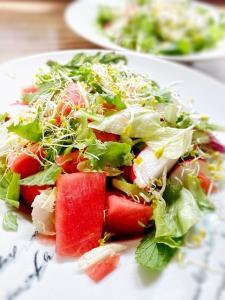 As mentioned earlier, watermelon recipes are very trendy right now, but there are certain food matches that go together better than others. Because of its inherent sweetness, watermelon pairs particularly well with salty flavours and this manifests itself best in different types of cheese, so for example in Watermelon and Feta Salad and watermelon and goats’ cheese. It also goes well with seafood for the very same reason, so why not try matching with prawns in a cold salad or even a stir-fry?

There’s nothing better than finding out one of your favourite foods is actually good for you, and watermelon is the gift that just keeps on giving. It’s not just that it’s approximately 92% water which makes it great for keeping you hydrated in the hot weather. It’s not just the fact that it contains all those antioxidants that we mentioned earlier (fact: watermelon has more lycopene than raw tomatoes). It’s that these lists of benefits just keep on getting longer and longer. So as well as keeping you hydrated, eating watermelon can actually boost athletic performance and improve post-exercise recovery thanks to one of its naturally occurring chemicals, l-citrulline. This accelerates lactic-acid removal, allowing athletes to recover faster after a workout. In addition to this, the same study discovered that a daily dose of watermelon could lower blood pressure, reducing the risk of a stroke or heart attack. And as well as the essential lycopene and antioxidants, each bite of watermelon contains Vitamins A, B6 and C AND amino acids and potassium AND is free of fat and low in sodium. You can’t really argue with that now, can you?

You might think we’ve exhausted all the reasons why you should eat watermelon but you’d be very wrong indeed. How about making your very own fruit bowl out of your watermelon skin? Just mark out the shape of the handle on the outside, cut with a sharp knife and scoop out the flesh (which you should put to good use, obviously) – you’ll then have the perfect table centrepiece for the summer to fill with berries and the like. And even though you might spit them out in most circumstances, did you know that watermelon seeds are not only delicious toasted but also have yet more health benefits as the contain magnesium, iron and folate? You see, they really are the gift that just keeps on giving…

Using Ocado discount codes and Sainsburys promo codes, you can not only order actual watermelons, but also many different types of watermelon products if you just don’t have time to slice one open there and then. And you can even use Chemist Direct promotional codes to save on watermelon extract for even more health benefits! You know it must be good if they’ve started making supplements out of it. But we do recommend that you don’t miss out on the taste of fresh watermelon if at all possible, especially on National Watermelon Day.