Larry the Cat Will Still Have a Home in Downing Street

Unlike the Camerons, Larry the Cat will not have to up sticks and find somewhere else to roam today. After the resignation of David Cameron, the nation was concerned that Larry would have to resign from his own position as resident Downing Street mouser, but as he officially belongs to the civil service rather than the serving Prime Minister, Larry can remain in his No. 10 post, casting a judgemental eye over the comings and goings as well as seeing off any rodent visitors. Here’s hoping Theresa May and her husband don’t have any cat allergies… 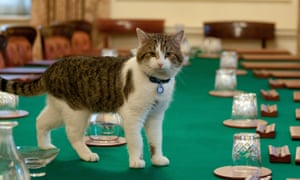 Downing Street has a long history of cat companions, and some might recall similar concerns over the fate of Humphrey the cat following a Labour victory in 1997. Prior to Larry, Humphrey was probably the most well-known cat to hold the official position of Chief Mouser to the Cabinet Office and was appointed to his post in 1989 following the retirement of his predecessor, Wilberforce. After serving under three successive Prime Ministers and retiring six months into the Blair’s residency, he passed away peacefully in 2006 (RIP Humphrey).

He was succeeded by a number of cats including Sybil, who belonged to then Chancellor Alastair Darling, but it was reported she could not settle in her London home and retired to Scotland with her owner.

Larry was rehomed in 2011 after a spell in Battersea Dogs and Cats Home and was chosen by Downing Street staff, but in spite of his official title, the Foreign Office cat, Palmerston, is reported to be the more superior mouser of the two moggies.


Not So Lucky Strays

It’s fair to say that former stray Larry has been lucky with his resulting residence, but there are lot of strays that aren’t quite as fortunate. The economic downturn of recent years has resulted in an increase of strays cats on UK streets, with some owners abandoning the cats they could no longer afford to feed.

In 2015, the RSPCA estimated cat ownership in the UK to be around the 7.4 million mark, and last year they rescued and collected nearly 119,000 animals in total.

For prospective cat owners who want to take on a Larry or their own, this all points in one direction – as with dogs, adopting a stray cat from a rescue home is by far the most responsible option in terms of animal welfare. And although cats have a reputation for being easier to look after than their canine friends, there is still plenty to think about if you’re considering adopting a cat, or have just taken one on.

- Introduce your cat to their new home gradually. They can take time to settle into any new territory, so start them off in one room to begin with, they gradually show them the rest of the house.

- Be cautious when introducing your new cat to existing pets. Keep them separate to start with, then perhaps mark an item with the scent of your old pet so the cat gets familiar to its smell before spending time with it. You could show them to each other without letting them interact, and then start the process of short amounts of contact. If you already have a dog that has boisterous tendencies, it’s best to keep it on a lead to begin with.

- Keep them inside for a few weeks, then gradually let them out for short periods of time (perhaps walking with them) until they get used to the outside area. And of course, make sure they are microchipped before they go exploring.

Ordering your cat food and accessories online is now incredibly easy, and if you buy in bulk you can find that feeding your cat is much more affordable. Waitrose promotional codes offer good pet food plans, and if you’re looking for toys and accessories to help them get settled and stay entertained, retailers like Monster Pet Supplies have good choice of products and deals.

So if you’re considering giving a home to a stray feline, make sure it feels as comfortable in its new home as Larry the Cat clearly does in No. 10 Downing Street and it will soon settle into its surroundings.